Control a Mouse with a Chip

- Controls behavior and monitors neural signals in real-time as soon as drugs are injected directly into the brain
- Published in a world-class international academic journal, Nature Communications

A chip has been developed that can control the brain of a mouse and monitor its behavior and neural signals in real time.

A research team led by professor Il-Joo Cho at Korea University has developed a micro wireless brain transplant device that precisely injects drugs into the brain of a free-moving mouse by manipulating a smartphone app to control its behavior and monitor its brain signals in real time. 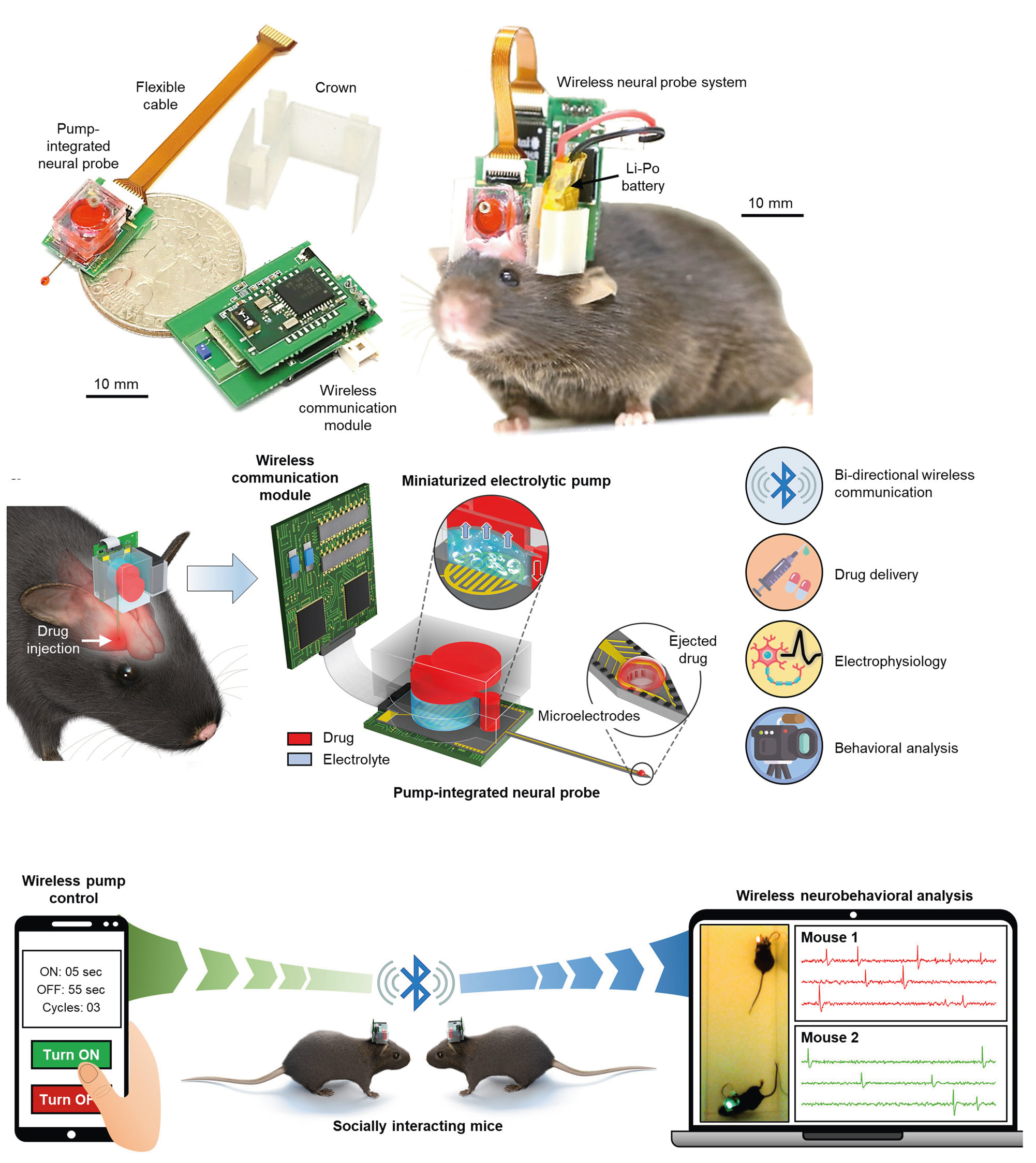 Existing studies are hampered by the difficulty to precisely control drugs or control behavior in real time because they are forced to observe changes in brain signals or behavior after injecting drugs using an external pump. The research team developed an ultra-small pump capable of precisely controlling the dose and connected it to a 0.1mm-sized brain chip, which has a microfluidic channel. The brain chip has integrated electrodes for precisely measuring brain signals that indicate responses to drugs.

In addition, the researchers succeeded in wirelessly controlling drug administration in a moving animal through a smartphone app and in recording brain signals in real time on a wirelessly connected laptop. This means that a wireless brain chip is now available that can administer drugs and read brain signals of responses even when the animal is moving freely. Furthermore, the ultra-light system design (4.6g) allows simultaneous drug administration and brain signal reading in the brains of several animals, even in those small animals like mice, by applying Bluetooth wireless communication that prevents signal interference.

The system developed by this research team demonstrated that various drugs can be administered to the brain of mice to induce repetitive behaviors or suppress appetite in real time, and successfully observed changes in neural signals.

Activity in the brain region associated with sociality was also seen to gradually weaken in the mouse once it recognized that it could occupy food without having to worry about the competition. In other words, the research revealed that competitors in the space were not recognized as such if they did not participate in the competition.

Professor Cho said, "The brain chip developed this time can analyze the effects of brain disease treatments in various ways as it can deliver drugs and measure brain signals at the same time in free-acting animals. We expect it to be a very useful tool to identify brain disease mechanisms and develop treatments."

The study was led by first co-authors of Drs. Hyogeun Shin and Yousang Yoon and corresponding author Il-Joo Cho and supported by the Cognitive and Social Studies Research Group of the Institute of Basic Science (IBS), the Ministry of Science and ICT, and the Korea Research Foundation. The study was published under the title of "Neural probe system for behavioral neuropharmacology by bi-directional wireless drug delivery and electrophysiology in socially interacting mice" in the online edition of Nature Communications (IF=17.69) on September 21.

The biophysical properties of exosomes extracted from senescent cells have been revealed for the first time in the world.

A research team led by Professors Ok Hee Jeon at Korea University Graduate School of Medicine and Gyudo Lee from the Department of Biotechnology and Bioinformatic at Korea University working together with Dr. Yoochan Hong of the Korea Institute of Machinery and Materials made comparison and analysis of biophysical properties of exosomes secreted by normal cells and senescent cells in an attempt to present them as features representing the expression of cellular aging.

Exosomes are disease-specific biomarkers that have been commercialized for developing new drugs and diagnosing various diseases. The research team presumed that exosomes extracted from senescent fibroblasts could be used as new senescent biomarkers, established a technique to precisely analyze the surface features and composition of exosomes in nano units using atomic force microscopy (AFM) and Raman spectroscopy, and compared and analyzed the biological properties of exosomes secreted from normal cells and senescent cells, respectively.

The study found for the first time in the world that exosomes secreted from senescent cells have a lower density of biomolecules such as DNA, RNA, and proteins, and have less negatively charged d due to the adsorption of positively charged senescence-associated secretory phenotype (SASP) factors onto the vesicle surfaces of senescent cells compared to those secreted by normal cells.

Professor Jeon who led the research said, "Our research is the first to these biophysical identified the biophysical properties of exosomes can be a hallmark of cellular senescence. We have found it could be utilized in the future as a new approach to diagnose aging and its prognosis."

The study titled, “Nanoscale biophysical properties of small extracellular vesicles from senescent cells using atomic force microscopy, surface potential microscopy, and Raman spectroscopy” was published in a journal well-known in the field of nano, chemical and materials Nanoscale Horizons, a sister magazine of the Royal Society of Chemistry. 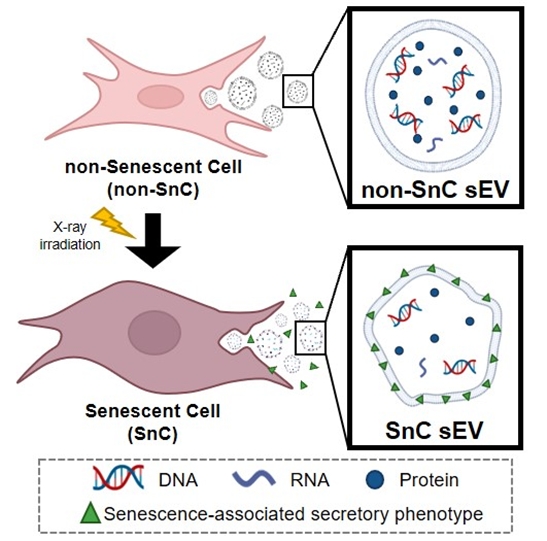 A stress-responsive molecular probe has been developed, which could differentiate cellular states for early diagnosis of avian influenza infection.

A joint study team led by Jun-Seok Lee, professor of Pharmacology at the KUCM and professor Dongwhan Lee of Chemistry at the Seoul National University developed new “T-shaped” fluorogenic molecules (extended and ligating imidazolyl fluorophore, EliF) and identified the molecule that selectively responds to minute changes within the endoplasmic reticulum. This molecule demonstrated light-emitting properties selectively in the cells infected with the avian influenza virus at the early stage of infection.

Existing studies on the diagnosis of avian influenza infection have been confined to either using the PCR technique specific to the gene sequence of the virus or the detection technique of using antibodies to the avian influenza virus protein. They make direct observation of the virus regardless of the subject being infected, whereas the research team launched the study with a focus on the interaction between the virus and the host cell.

Viruses multiply actively interacting with host cells, and they have different infection sensitivities depending on the genetic and developmental characteristics of the host cells. The research team reported that the patterns of avian influenza infection are different in cell line models with different organ-derived cells and genetically different backgrounds, and based on this, new molecular probes and chemical protein analysis methods have been studied to understand the interaction between viruses and host cells at the molecular level.

Furthermore, chemical proteomics profiling and bioinformatics analysis were performed to identify proteins interacting with the EliF within cells, and it was found that proteins and EliF molecules associated with endoplasmic reticulum stress interact selectively. The endoplasmic reticulum is an organ where protein synthesis takes place, and in neurodegenerative diseases, diabetes, and viral infections, a physiological response called endoplasmic reticulum stress occurs. This means that aggregation and accumulation of abnormal folding proteins occur in the endoplasmic reticulum. Flow cytometry analysis demonstrated that EliF molecules can measure the initial change in avian influenza virus infection at the cell level as a change in fluorescence. This new analysis technology will allow researchers to study the characteristics of host cells vulnerable to infection since cells infected with the avian influenza virus can be detected and separated from complex cells and tissues.

In addition, unlike the existing infection diagnosis approach, which takes several days to complete, the method developed by the research team is significant in that the degree of infection can be quantified within 24 hours based on the intensity of fluorescence at the single cell level.

Professor Lee, who led the research said, "The EliF molecule allows us to monitor virus infection at the single-cell level in the early stage of avian influenza virus infection. This will lay the foundation on which we can determine the mechanism of action of infection and develop therapies."

The study was led by first co-authors: Dr. Taewon Kang of Seoul National University; Dr. Mamunul Haque of Korean University; and corresponding authors of Jun-Seok Lee of Korean University; and Dongwhan Lee from the Department of Chemistry at Seoul National University. The effort was supported by the Ministry of Science and ICT, Korea Biomedical technology development project (for the future infectious disease technologies) of the National Research Foundation, Medium-sized Research Support Project, and the Samsung Future Technology Promotion Program. The study entitled “Orthogonally-tunable and ER-targeting Fluorophores Detect Avian Influenza Virus Early Infection” was published on-line in the sister journal of Nature, Nature Communications (IF=17.69)>.

Research Team Led by Professor Kihoon Han from the Department of Neuroscience Identified a Novel Cause of West Syndrome, a Rare Neurodevelopmental Disorder

- Major symptoms such as spasm-like movements, microcephaly, and developmental regression were confirmed in a mouse model carrying the human genetic variant
- The study was published in an international academic journal, Annals of Neurology

A new cause of West syndrome, a rare neurodevelopmental disorder, has been identified, inspiring hope for treatment.

A joint research team led by Professor Kihoon Han from the Department of Neuroscience at KUCM working together with another team from the Institute for Basic Science (IBS) Center for Synaptic Brain Dysfunctions (Director Eunjoon Kim) confirmed in an animal model that a single-nucleotide mutation in the CYFIP2 gene could be the cause of West syndrome. 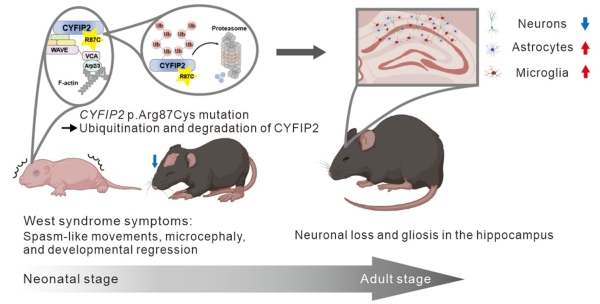 West syndrome is a rare neurodevelopmental disorder that occurs in less than six per 10,000 newborns. This intractable disease shows such symptoms as infantile spasm and epilepsy in infants before they turn one year old and is subsequently accompanied by intellectual disability and developmental regression. The research team noted that a number of CYFIP2 gene mutations were recently reported in genetic analyses of West syndrome patients abroad, and generated and comprehensively characterized a mouse model carrying the most frequent mutation (hotspot mutation, p.Arg87Cys).

They confirmed that the mice with CYFIP2 p.Arg87Cys variant recapitulated representative symptoms seen in patients with West syndrome, such as spasm-like movements, microcephaly, and developmental regression at an early age. It was also found that neurons were lost in the hippocampus during adulthood, and there was an overgrowth of astrocytes and microglia (gliosis). Furthermore, in terms of a molecular mechanism, it was found that the p.Arg87Cys mutation promoted ubiquitination and proteasomal degradation of the CYFIP2 protein.

Professor Han, the principal investigator, said, "The most important achievement is that this research verified the causal relationship between the CYFIP2 gene mutation and West syndrome, and specifically explained the effect of the mutation on CYFIP2 protein. The CYFIP2 mutant animal model produced for this research is of great value as it can be used to understand the detailed pathophysiological mechanism of West syndrome and to develop new therapies."

The study was led by co-first authors Muwon Kang, a graduate student at KAIST; Dr. Yinhua Zhang of KUCM; Hyae Rim Kang, a graduate student at KUCM; co-corresponding authors director Eunjoon Kim from IBS Center for Synaptic Brain Dysfunctions; and Professor Kihoon Han at KUCM. Support for the study was provided by the Ministry of Science and ICT, the National Research Foundation of Korea and the IBS Center for Synaptic Brain Dysfunctions. The study results, entitled "CYFIP2 p.Arg87Cys Causes Neurological Defects and Degradation of CYFIP2," was published in the online edition of the renowned international journal Annals of Neurology (IF=11.274) on October 17.