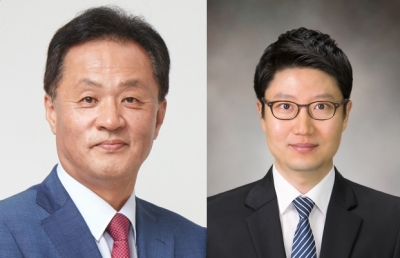 A research team led by Hee Chul Han, professor of physiology, Korea University College of Medicine and Eui Ho Park, research professor of the Neuroscience Research Institute, established a correlation between the low back pain and the degenerative disk. Low back pain (LBP) is a condition that affects the largest number of people in the world as it downgrades the quality of life and increases years lived with disability (YLD) according to WHO report.
Sitting between adjacent vertebrae in the vertebral column, an intervertebral disc consists of the jelly-like nucleus pulposus and surrounding annulus fibrosus which protects it and a disc functions as a shock absorber for the spine. Aging process or repetitive injury can cause the intervertebral disc to herniate and to expand which leads to its degeneration. Those degenerative discs not only compress the spinal nerves and spinal cords but also deliver abnormal pressure on to the posterior facet joints and ligaments, and such mechanical pressure leads to pain. The pathological mechanism of intervertebral disc was discovered but there have been no objective indices that represent the presence and absence of pain from intervertebral disc.
So the research team launched a project to examine sensory nerve excitability, which is a representation of pain behavior and sensitivity in an animal model of low back pain resulting from degenerative disc disease. Mechanical stimuli were applied to the intervertebral disc in the low back pain animal model whose intervertebral discs of lumber 4 and 5 were punctured and the nucleus pulposus of the disc was completely aspirated. They found the single nerve sensitive response escalated in the low back pain animal model.
Back in 2001, the study team developed a world’s first weight-bearing device, which was conceived from the idea that those who feel pain on one leg tends to carry more weight on the other leg when walking and this device was used to conduct experiments in the study.
Normally, weight load is preferentially distributed to the hind limbs, while the low back pain animal model tends to have its load distributed to the foreleg. Such finding suggests a new behavior index of the low back pain.
In conclusion, the research team established that the degenerative disc led to sensitization response in the sensory nerve innervating intervertebral discs. The study team used an electrophysiological approach in order to prove the correlation between the degenerative disc disease and low back pain. Up to now, lack of appropriate behavior index for low back pain has prevented related researches from being performed. So the finding of this study is sure to facilitate other researches on the related topics.
This study entitled “Disc degeneration induces a mechano-sensitization of disc afferent nerve fibers that associates with low back pain” was published in on-line version of Osteoarthritis and Cartilage, a well-known journal in the orthopedic surgery. It was also introduced as a landmark research in the newspaper, Orthopedics This Week.
Professor Han said, “The study outcome is very useful in revealing the main cause of low back pain and it can be used in various studies as it allows a direct measurement of pain.” He also added, “I hope that this study will be of help to the patients as it would pave the way for more studies to be done on the mechanism of intervertebral disc injury, which is the main cause of low back pain.”

Professor Hee Chul Han graduated from Korea University College of Medicine in 1983 and joined the faculty of Department of Physiology in 1992. Having served as Vice Dean of Academic Affairs and Director of Medical Academic & Student Affairs Team, he was 27th Dean of Medical College during December 2011 to December 2013. He has been very active in other initiatives of medical community: he was the editor of Korean Journal of Physiology and Pharmacology, chairman in charge of development for The Korean Pain Research Society, and PR director for the Korean Academy of Medical Sciences. Currently he is a full member of the National Academy of Medicine of Korea and Chairman of the Board of Directors and Korea Association of Medical Colleges.

A New Hope for Aggressive Meningioma

Meningioma is the most common primary brain tumor arising in the membrane of the brain. Most meningiomas have benign characteristics with favorable treatment outcomes, yet a fraction of the patients eventually recur with an aggressive type. Those recurrent meningiomas hardly responds to surgery, radiation therapy and chemotherapy, and the afflicted patients can only expect poor outcomes.

The KU Medicine research team examined 101 meningioma patient samples from Anam Hospital and found that a protein called FOXM1 plays important roles during the malignant conversion of meningioma. The team also showed that an experimental drug suppressing FOXM1 prevents meningioma growth in laboratory mice, confirming that FOXM1 is a crucial molecule for meningioma progression. Dr. Kang, the lead investigator, explained, “We are currently performing further research to develop a new drug targeting FOXM1, and also we are confirming whether we can use FOXM1 as a marker to predict which patients will ultimately progress to malignant meningiomas.”

This study entitled “Forkhead box M1 (FOXM1) transcription factor is a key oncogenic driver of aggressive human meningioma progression” was funded by the National Research Foundation of Korea and published on the June 9th 2019 issue of Neuropathology and Applied Neurobiology, one of the best among the top 10% of the neuro-science journals. 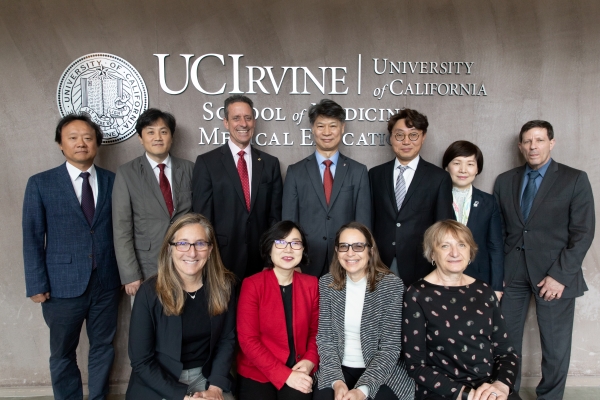 International exchange with other top universities has led the Korea University (KU) College of Medicine to enhance its presence in the global arena.
Recently, the KU College of Medicine successfully held academic symposiums in collaboration with the University of California Irvine (UCI) School of Medicine and the Nagoya University Graduate School of Medicine.
On May 19, the ‘Second Joint  Symposium between KU-UCI’ was held at the Medical School of UCI following its first event that took place in February. At the event, professors of the two schools shared their views and knowledge across six topics: Stem Cell Research in Neuroscience; Precision Medicine; Medical Education; Gastroenterology; Big Data and Medicine; and UCI-KU Optical Collaborations.
Speakers from the Korea University included Hong Sik Lee, Dean of Medical College; Woong Sun, Vice Dean of Study & Exchange; Jang Wook Sohn, Professor of Infectious Diseases at Anam Hospital; Kyung Hwa Park, Professor of Medical Oncology and Hematology at Anam Hospital; Professor Cheol Woong Rhew, and professor Suhong Seo while counterparts from the UCI were Michael J. Stamos, Dean of Medical College; Suzanne B. Sandmeyer, Vice Dean for Research and others who spoke about major research subjects.
Following the session, KU professors paid a visit to the major facilities of UCI Medical School such as the Sue & Bill Gross Stem Cell Research Center, UCI Applied Innovation Center, Medical Education Building and Technology, Genomic High-Throughput Facility, Comprehensive Digestive Disease Center, and Douglas Hospital.
At the joint symposium with UCI School of Medicine were discussions on diverse topics including the short-term visit programs to various centers of UCI School of Medicine such as the Stem Cell Research Center, Applied Technology Innovation Center as well as having symposiums involving basic and clinical classes.
Later on July 18 the 'KU College of Medicine - Nagoya College of Medicine Symposium’ took place at the special meeting room of the Central Consulting Building of the Nagoya University. Following MOU signed last year and invited lecture by president Kenji Kadomatsu, the symposium was organized in order to promote cooperation for research among professors of the two schools.
Hong Sik Lee, Dean of Medical College; Woong Sun, Vice Dean of Study & Exchange; Hak Jun Kim, Dean of Public Relations; Chang Soo Han, Director of External Cooperation & Funding; Jae Jun Song, Professor of Otorhinolaryngology at Guro Hospital attended the meeting to exchange views and talk about the possible joint research and student exchange programs with the counterparts from the Nagoya Medical School.

KU College of Medicine will be on the forefront of setting the standards of medical education by having active cooperation and exchange with other schools abroad in academic affairs, clinical application and exchange of students and faculty.