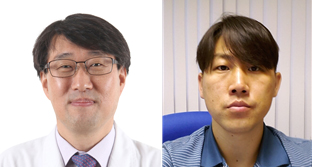 A Korean research team developed a fast detection diagnostic technique for infectious disease such as Dengue, malaria, MERS and others.
A research team led by Chae Seung Lim, professor of Laboratory Medicine, College of Medicine, Korea University Guro Hospital, and professor Jeonghun Nam of Korea University succeeded in developing a wave-based microfluidic technique for rapid and easy detection of infectious disease viruses such as Dengue, malaria, MERS and so on, which would enable early diagnosis.
The research team used the Lamb wave-based mechanical vibration energy to generate movement of particles suspended in the sample containing the Dengue virus. The virus in the sample caused an increase in the viscosity during the genetic amplification process, which induced the streaming velocity decrease of suspended particles. The virus could be detected by comparing the test result with that of a sample without the Dengue virus, which took only 25 minutes in total. In contrast, the conventional molecular approach for detection of Dengue virus is complicated and time-consuming. It takes almost an hour, making the timely diagnosis impossible in clinical setting. In addition, the conventional gene amplification test requires an expensive equipment that costs as much as around 40 million won, and a skilled expert to conduct the test. In other words, it limits the use of the conventional methods in resource-limited developing countries that especially need such a system due to serious infectious disease problems. The main advantages of this newly developed technology are the rapid and accurate diagnosis using a small volume of sample, as little as a sessile drop of 30~50 μl, negating the need for expensive equipment. Also, isothermal process at room temperature or 37℃ is enough for assay, enabling non-experts to simply use the system. Such economic benefit and convenience combined with the accurate results are likely to make the technique widely adopted in the future.
Professor Lim said, “It is the first time to apply the wave-based microfluidic technique to measure the viscosity change, which can be used for molecular diagnostics.” He explained the significance of the study by adding, “Using our newly developed technique, a variety of analysis can be conducted using a small amount of bio-fluids such as blood and saliva with high yield. Therefore, it can be widely used in resource-limited developing countries.”
Dr. Jeonghun Nam said, “Based on the follow-up researches, it was confirmed that it is possible to detect other infectious disease as well as Dengue. Accurate and fast detection of parasites, bacteria and viruses including malaria, MERS, Ebola, Zika and others can help to stop the spread of infectious disease and allow timely treatment, which can in turn reduce mortality. It is expected that this technique can be a useful tool for early diagnosis in the future.”
The study was conducted as part of the Korea Infectious Disease Research and Development Project and published on July 10th online version of the Biosensors & Bioelectronics (Impact Factor =9.518), a top-class SCI journal exclusively covering researches on biosensors.
pubmed link: https://www.ncbi.nlm.nih.gov/pubmed/31302395
Biosens Bioelectron. 2019 Oct 1;142:111496. doi: 10.1016/j.bios.2019.111496. Epub 2019 Jul 10. 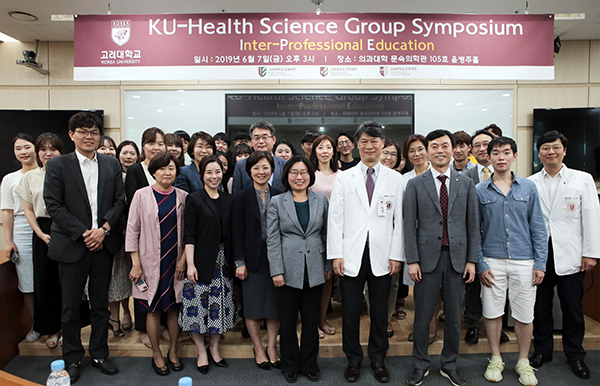 Organized by the Colleges of Medicine, Pharmacy, and Nursing of the Korea University and held at Yoon Byeongju Hall, Moonsuk Building on June 7, the ‘KU-Health Science Group Symposium’ was well attended.
Emerging as a viral topic among those in universities committed to training healthcare professional such as doctors, pharmacists and nurses is the ‘Inter-Professional Education (IPE).’ IPE refers to occasions when students from two or more professions learn together. In line with such trend, the KU College of Medicine invited College of Pharmacy and College of Nursing to form the ‘KU-Health Science Group’ together. Following the formation, a symposium was organized in order to have a better understanding of the curriculum of each college, promote co-research through mutual exchange and make contribution to the advancement of healthcare industry as a whole.
The event was attended by more than 70 people consisting of professors, graduate school students and undergraduates who showed keen interest in the topic. It started with the opening speech by Ho Seong Sohn, Vice Dean of Academic Affairs followed by lively presentations on related subjects: Understanding and Convergence in Health Science by Hong Sik Lee, Dean of Medical College; Introduction to the Curriculum of Each College by Choon Hak Lim, Dean of Medical Education; Jeong Gi Kim, Manager of Pharmacy; and Won Ok Oh Manager of Nursing Service; IPE in Health Professionals - What & Why? by Dr. Young Mi Lee, Professor of Medical Education; Present and Future of KU-HSG by Hong Sik Lee, Dean of Medical College; Yong Ho Jun, Dean of College of Pharmacy; and Gyeong Ae Seomun, Dean of College of Nursing. The event was wrapped up with a discussion and a closing ceremony.
Hong Sik Lee, Dean of KU College of Medicine said, “Healthcare education should be able to brace itself for the future. It is important to train students to grow their skills while devoting our energies to research. At the same time, we should commit ourselves to making new explorations and contribute to further advancement.” He also added, “I hope that today's symposium will take the Korea University to another level of education and research in medicine, pharmacy and nursing service so that we would be on the forefront of leading the future.”
Yong Ho Jun, Dean of KU College of Pharmacy said, “I agree to the methodologies and strategies required. It is time for us to think about how to best shape the KU-Health Science Group. I hope that KU-Health Science Group will be leading the advancement of health and medical services in Korea.”
Gyeong Ae Seomun, Dean of KU College of Nursing mentioned, “I appreciate the fact that the three colleges got together with one goal in mind. I think having this kind of chance to start something together is of great significance and value. I expect that three colleges will cooperate in various fields in the future with the goal of offering patient-centered safe care to our patients through evidence-based collaboration.”
A KU College of Pharmacy student said, “It was meaningful in that I was able to listen to the views of professors from different disciplines and backgrounds. I hope that  KU-Health Science Group makes further progress through cooperation in various areas including education. Having seminars, voluntary service and other activities together would be very valuable too.” 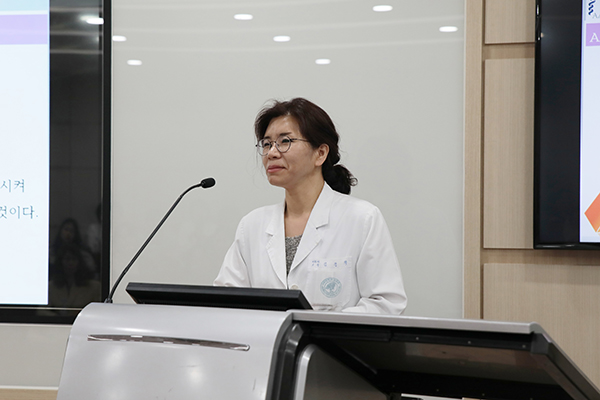 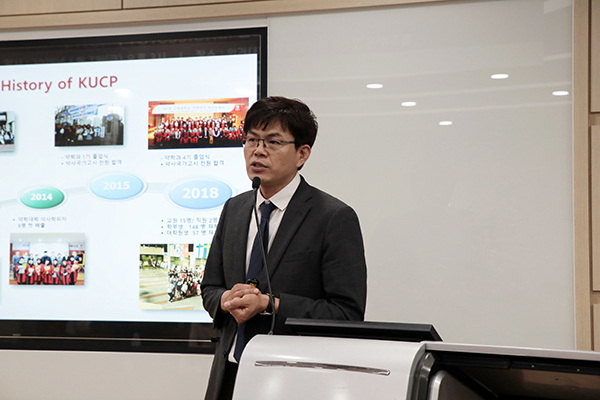 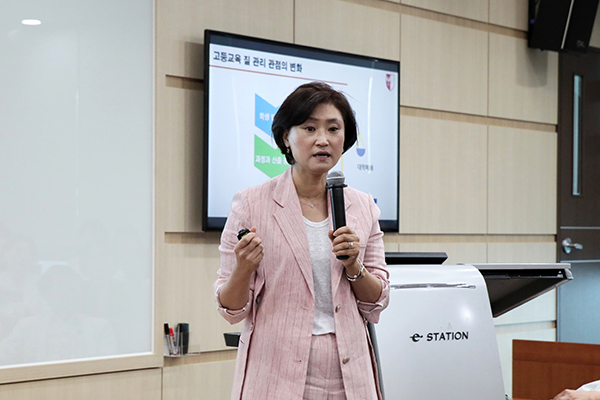 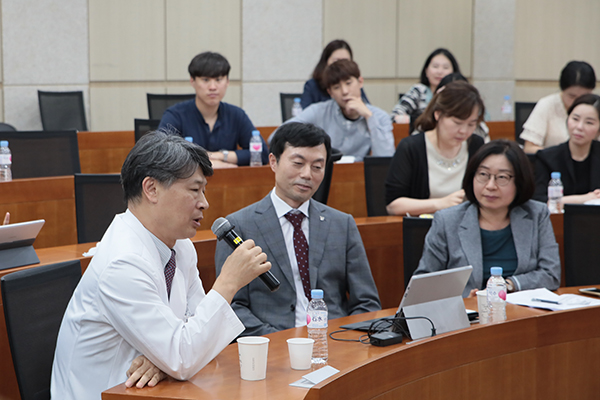 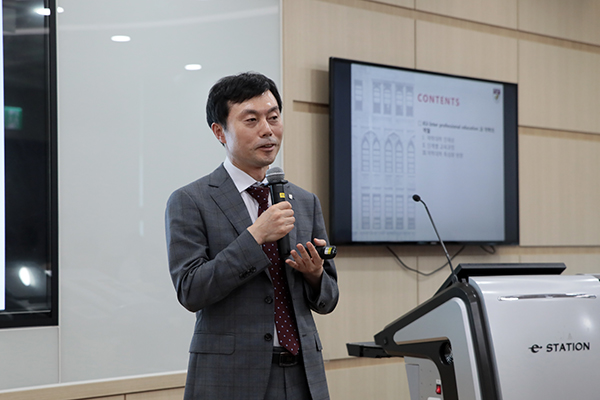 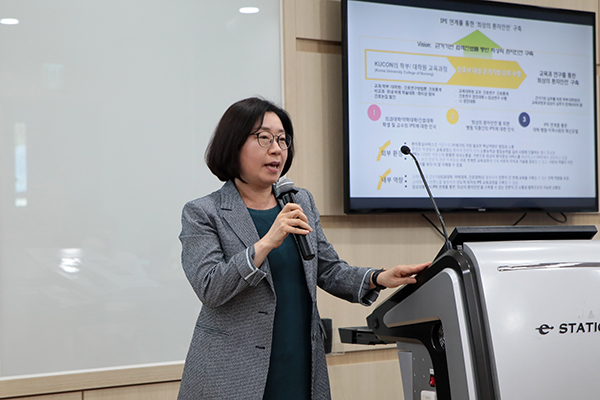 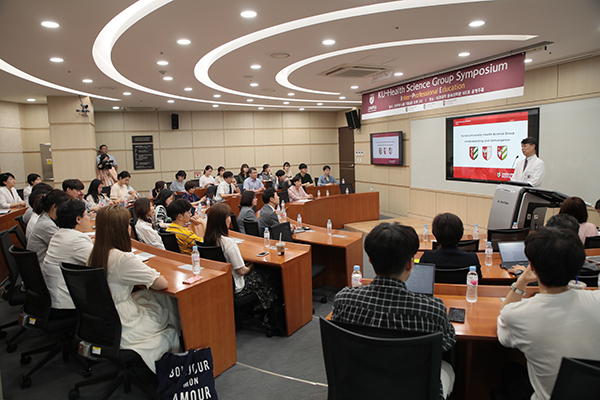 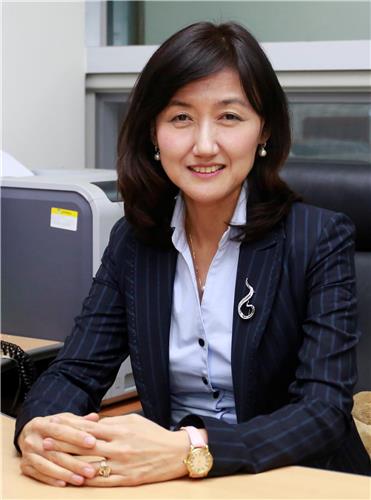 A research team led by Dr. Kyung-Mi Lee, a professor of Biochemistry and Molecular biology, Korean University College of Medicine, presents a new target for acute hepatitis, which may shed light into the development of a new therapy for liver diseases.

Hepatitis is the main cause of liver diseases. In particular, acute hepatitis causes hepatic cells to die with its strong inflammation, which can further lead to acute liver failure. In acute hepatitis, overly activated immune cells can cause liver injury. Therefore, it is essential to identify the immune cells that are activated during the process along with their mechanism of actions.

CD160 is the receptor expressed on immune cells such as NK cells, NKT cells, and some T cells. It is known to compete BTLA (CD272) in order to bind to the HVEM (CD270) ligand. BTLA, which is expressed on NKT cells had been reported to control excessive immune response by binding to HVEM. So the CD160, which binds to the same ligand of HVEM, was expected to activate NKT cells. Indeed, our team has demonstrated that CD160 functioned as a receptor to activate NK cells (JEM, 2015). However, the currentstudy shows that CD160 is not an NKT cell stimulator but an inhibitor contrary to the expectation. In other words, in acute liver inflammation, there is a rapid increase in the CD160 receptors expressed on NKT cells, which functions like a brake on inflammation.

In the CD160 deficient mice that we produced in order to study the role of CD160 receptor on NKT cells, α-galactosylceramide (α-GalCer) which is NKT cell-specific ligand was applied to see the liver injury speed up and the AST/ALT level increase in the blood. It is also confirmed that the IL-4 and IFN-g cytokine secreted from the NKT ells increased significantly in both cell and animal levels. It is also proven with the Mixed Bone-Marrow Chimera (CD160KO/WT) that the defect is intrinsic to NKT cells. In addition, when acute hepatitis was induced with Concanavalin A (Con A), there was excessive inflammatory response in the CD160 deficient mice, which led to a significant increase in death rate. Findings of our study indicate that the CD160 receptor is a major factor that suppresses overactive immune reaction initiated by NKT cells. This finding is meaningful in that it can contribute to the development of a new therapy of liver disease especially acute hepatitis, targeting the CD160 receptor.

The research results were published in Journal of Nature Communications under the title, CD160 serves as a negative regulator of NKT cells in acute hepatic injury. 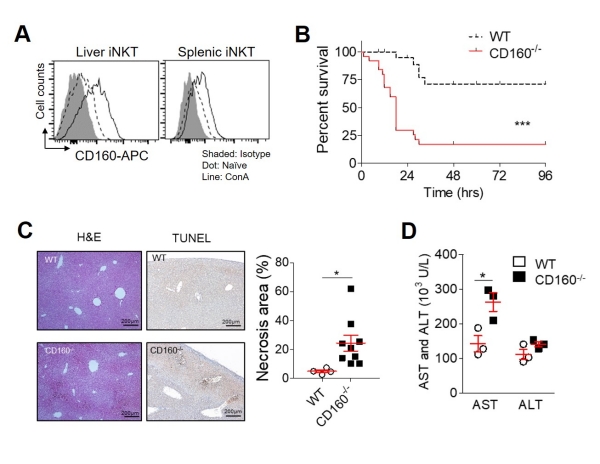 Researchers led by Prof. Jin-Won Song succeeded in building a surveilance system to identify the emergence of Hantaan viruses. 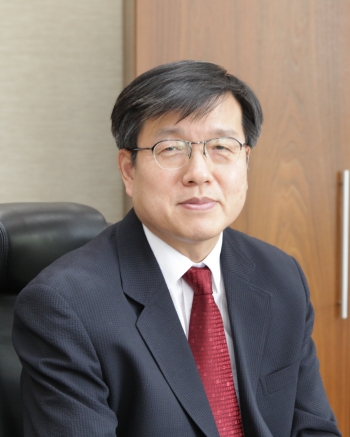 Hantaviruses were first discovered in the striped field mouse (Apodemus agrarius) and isolated by Dr. Ho Wang Lee in 1976, well known to cause HFRS. Hantaviruses are transmitted to humans via infected mice and cause renal failure, hemorrhage, thrombocytopenia and shock, posing fatal threats to life. Hantaviruses are evenly spotted around the world as well as in Korea and the domestic species include Hantaan orthohantavirus (HTNV), Seoul orthohantavirus (SEOV), Imjin thottimvirus (MJNV) and Jeju orthohantavirus(JJUV).

The recent outbreaks of zoonotic Ebola and MERS viruses enhanced caution and needs for active surveillance system to trace new-emerging infectious agents and to identify infection sites. Prof. Jin-Won Song's research team has long been studying genetic features and pathogenicity of hantaviruses and recently succeeded in decrypting the complete genome sequence of HTNV from HFRS patients using Next-generation sequencing (NGS). The study identified the suspected sites of patient infections through epidemiological surveys with patients and phylogeographic analyses based on the geographic locations of HTNV-positive rodents. The results showed that the complete genome of HTNV, epideomiological surveys and targeted trappings enabled effective tracking and surveillance of the emergence of hantaviruses.

The study is also a prime example of global joint research led by researchers from Korea University College of Medicine and the US.

Prof. Song discovered various types of new viruses including "Imjin thottimvirus" and "Jeju orthohantavirus" since he joined the Department of Microbiology in 1996. He was awarded the National Academy of Sciences of Korea Award in 2011 and the Ho Wang Lee Award in 2013 for his academic achievement. He is a renowned scholar in the field of virus research and is serving as the next President of the International Society of Hantaviruses and the Korean Society of Virology. The Department of Microbiology at Korea University College of Medicine where Prof. Jin-Won Song is affiliated has contributed to the advancement of medical sciences since 1976 when Prof. Ho Wang Lee found hantaviruses for the first time in the world, known as the cause of HFRS, and members of the Department are conducting vigorous research on diverse pathogenic viruses.