On Friday, March 23 (3:00 pm), Korea University College of Medicine (KUCM), along with the College of Engineering, hosted the Convergence Research Forum at Song Moo Hyun Lecture Hall (in the new Engineering building).

Recently, medical schools have engaged in joint research with the engineering discipline to develop new innovations, such as in dielectric analysis, nanotechnology, robotics, and 3D printing. In keeping with these developments, in August 2017, KUCM launched 15 research teams, provisioning research funding to the groups, comprised of professors from the schools of Medicine and Engineering.

The purpose of the Forum was to share the outcome of the 7-month long research with members of KUCM and the College of Engineering. Eighteen professors from the two Colleges made presentations regarding their work, encompassing new drug substance development, treatment techniques, platform development, and gene network analysis. After each presentation, intense questions and information sharing ensued.

Jin Taek Chung, Dean of College of Engineering, commented, “The recent Convergence Research Forum was organized to present the latest trends and findings in medicine and engineering. By generating public discussion, we have built a pillar that will support future scientific development.” He added, “I hope that the two Colleges will continue to communicate and engage in more active research.”

Dean Hong Sik Lee emphasized the necessity of convergence research by claiming, “Generally, because convergence research is more effective in research impact and citations, it is instrumental to leading the future of science.” He also expressed his gratitude and future expectations by mentioning, “More of all, I would like to thank the professors who were dedicated to the research, and it is my hope that the two Colleges will continue to pool their core capabilities in order to produce greater synergy.” 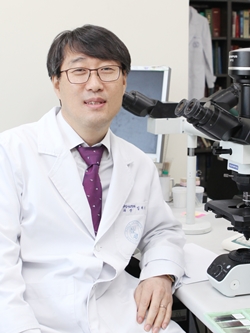 Malaria is a threatening disease that causes more than 800,000 deaths per year around the world caused by plasmodium malaria transmitted by mosquitos. Recently, many new antimalarial drug compositions are being studied; however, progress has been limited by drug resistant malaria that are generated by overuse of existing drugs. Using PDI therapy, certain light waves of photosensitizers are absorbed, creating a photoexcited state that generates reactive oxygen species through charge-transfer and/or energy-transfer. The oxidizing power of the reactive oxygen species that are generated, and the characteristics of the bio-signals, induce apoptosis or necrosis of the harmful organisms.

In order to eradicate malaria using PDI, the research team used pheophorbide A (PA) as the photosensitizer. To effectively eliminate malaria parasitic to the erythrocyte, the PA photosensitizer was combined to the surface of the Fe3O4 nanoparticle. Using the photofunctional nanoparticle (Fe3O4@PS), the enhanced permeability and retention (EPR) effect was capitalized in order to introduce the photosensitizer into the plasmodium-infected erythrocyte. In addition, long-term trace was administered to test the efficacy of PDI in malaria eradiation.

To induce effective cell uptake, using the EPR effect of the nanometer-sized particles, and to take advantage of longer retention inside the cell, photo-functional nanoparticle (Fe3O4@PS), which introduces photosensitizer (PS) into the Fe3O4 nanoparticle, was used as the PDI agent. Scanning electron microscopy (SEM) and X-ray diffraction (XRD) analysis were used on the fabricated Fe3O4 to study morphology and structural characteristics. However, to study the photofunctional nanoparticle (Fe3O4@PS) that introduces photosensitizer on the surface of the nanoparticle, fourier transform infrared spectroscopy (FT-IR) analysis and time-resolved spectroscopic methods were applied, to identify bonding properties and photophysical properties between the Fe3O4 nanoparticle and the PS. In addition, the generation of singlet oxygen, a major reactive oxygen species (ROS), produced by the photofunctional nanoparticle (Fe3O4@PS), was confirmed by measuring time-resolved singlet oxygen phosphorescence.

By comparing the difference in PDI efficacy between in-vitro PS in molecular format, and one using fabricated photofunctional nanoparticle (Fe3O4@PS), the study found that the latter has higher uptake rate in the plasmodium-infected erythrocyte, longer retention time, as well as 44% improvement in PDI efficacy. Moreover, after PDI treatment, the plasmodium-infected erythrocyte was incubated for 8 additional days to test for complete eradication of the malaria. As a result, the molecular state PS used in PDI failed to eliminate malaria completely; on the other hand, the PDI treatment using photofunctional nanoparticle (Fe3O4@PS) no longer produced malaria in the erythrocyte. The findings revealed that in treating malaria with PDI, the photofunctional nanoparticle (Fe3O4@PS), which is PS combined with nanoparticles that can induce EPR effect, is an effective PDI agent. The study also proved that when treating plasmodium-infected erythrocyte using PDI, rather than using PA in its molecular state, Fe3O4@PA yields more advantages, and that it offers the added benefit of being able to administer reduced volume of PDI agent.  The findings of the study are published in ACS Applied Materials & Interfaces, under the title, “'Eradication of Plasmodium falciparum from Erythrocytes by Controlled Reactive Oxygen Species via Photodynamic Inactivation Coupled with Photofunctional Nanoparticles.”

On February 26-27, the Korea University’s College of Medicine (KUCM) successfully hosted a joint two-day academic symposium with the University of California Irvine’s School of Medicine (UCISM).

The goal of the symposium was to discuss five topics that are gaining increasing global attention: Medical Education and Research; Colorectal Surgery; Infectious Diseases; Precision Medicine, and; Circadian Rhythm. Faculty from both Universities presented their latest research and findings, and the venue allowed participating scholars to exchange their scholarly work and views.

Day one of the symposium began with opening remarks from Woong Sun, Associate Dean for Research & Global Engagement, followed by a welcome speech from Dr. Kee Hyoung Lee, Executive Vice President for Medical Affairs of Korea University. Next, there were general introductions of KUCM and UCISM, respectively. The planned sessions proceeded, and ended with closing remarks delivered by Dr. Hong Sik Lee, Dean of KUCM.

Dr. Lee underlined the goal and future prospects of the symposium by saying, “Today’s symposium carries tremendous meaning in that it is the first tangible outcome of the exchanges that began with my predecessor’s visit to UCISM in 2016.” He added, “It is my hope that this symposium will foster closer academic research cooperation between the two schools, so that we may together lead the world’s advancements in medicine. Furthermore, through deeper friendship, I hope that we can continue to contribute to mutual and joint development.”

Day Two delved deeper into the topics presented in each session a day earlier. In addition to the researchers in each area, graduate students and other faculty members who harbor interest in the areas, took part and discussed ways to engage in continued collaborative research.

Dean Lee, explained the significance of the symposium by stating, “KUCM has been exerting efforts to advance joint research in Korea and overseas. As an example, we have been promoting joint studies between the College of Medicine and the College of Engineering, as well as joined the Global Alliance of Medical Excellence, which is a coalition of the world’s 9 top medical schools. This event is more than a simple academic symposium; we have built the foundation that will allow us to continue to engage in exchange with scholars at UCI.” He also expressed the wish to continue this effort by urging, “I hope you will strengthen the exchange between the two schools, and make sizeable contributions to promote joint talent and academic development.” 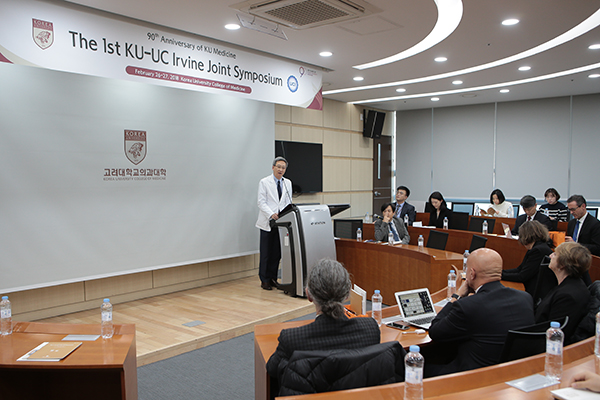 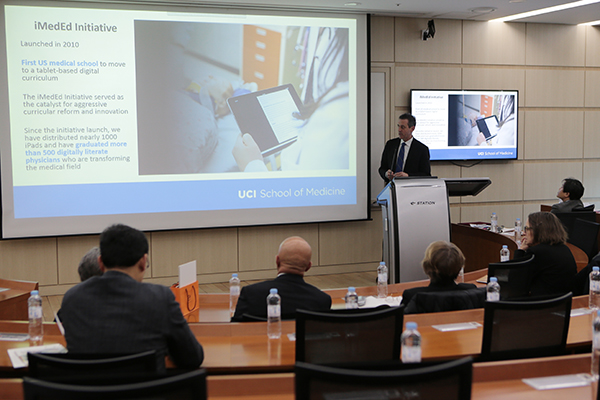 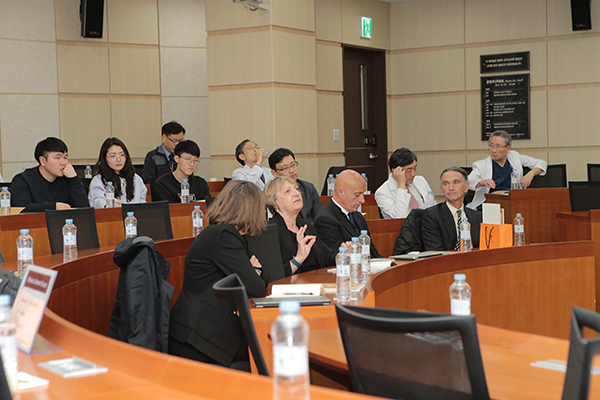 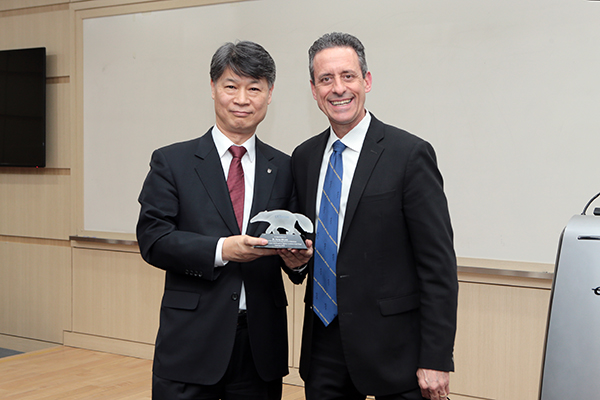 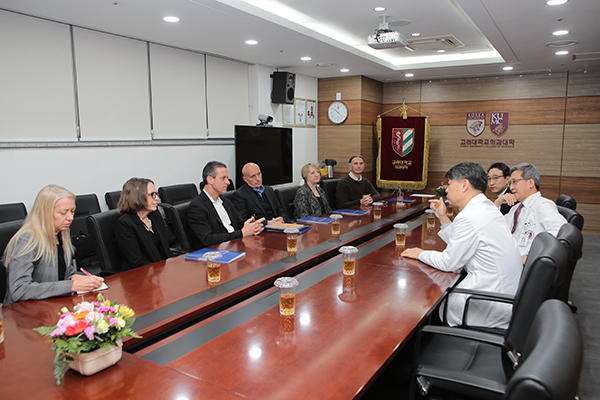 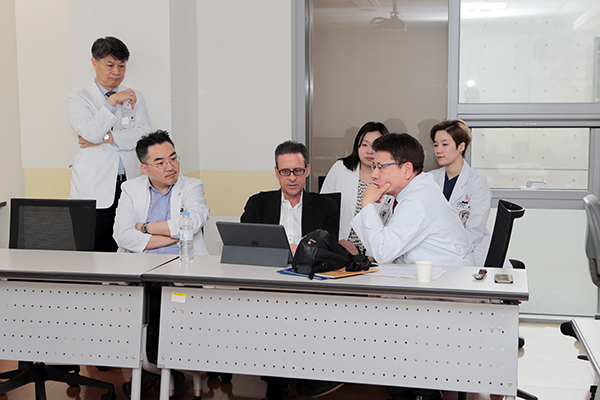 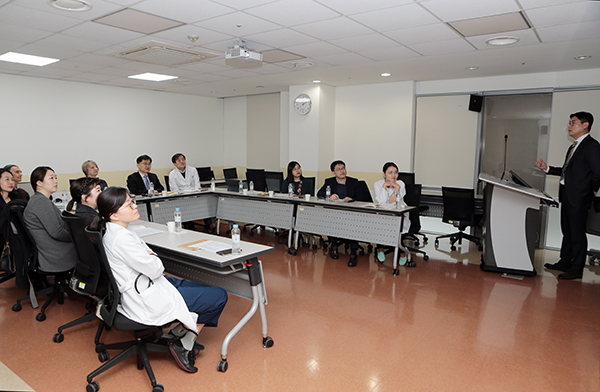 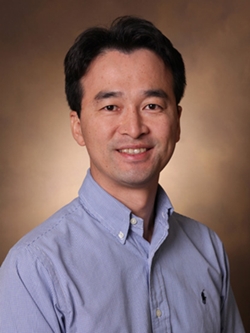 The research team led by Dr. Serk In Park (SI Park), a professor of Biochemistry and Molecular Biology in the College of Medicine at Korea University, succeeded in uncovering the microenvironment of osteoblastic bone metastasis, suggesting a potential new treatment for the late-stage prostate cancer.

Bone metastasis is one of the most fatal clinical problems in the patients with breast, lung and thyroid cancers, which occur in high frequency among Koreans, as well as with prostate cancer, which has also risen sharply in recent years. No effective treatments are available for this condition, and those who suffer from bone metastasis often halt or abandon their therapies because they are considered to be in end-stage of their disease. Despite that breast cancer and prostate cancer have high 5-year survival rates, bone metastasis is especially prominent as the cause of death in these cancers beyond 5 years.

Moreover, the team developed a unique animal test model and cell strain test models to prove that cabozantinib, which is widely used to treat renal cancer, is also effective in suppressing prostate cancer bone metastasis and osteolysis. Because this research brought findings from a clinical observation back in to the test lab, clarifying the biological mechanism at work, it is regarded as an upgrade to previous translational studies, making it a good example of ‘reverse-translational study.’

Professor SI Park claimed, “The findings of this study will contribute to building a treatment system for prostate cancer, the frequency of which has been rising sharply in Korea.” He also emphasized, “Only when there is continuous cooperation and communication between clinical researchers and lab researchers, can we yield clinical tests with strong scientific backing, making the findings significantly more meaningful.”

The findings of the research have been published in the February volume of Cancer Letters, a scholarly journal rated in the top 10% of oncological studies. Entitled, “Dual Targeting c-Met and VEGFR2 in Osteoblasts Suppressed Growth and Osteolysis of Prostate Cancer Bone Metastasis,’ the study was conducted as part of the National Cancer Control System Design Project, sponsored by the National Cancer Center. It was a joint study with Professor Sun-wook Cho of Endocrine & Internal Medicine Department of the Seoul National University Hospital, and Professor Florent Elefteriou of the Vanderbilt Center for Bone Biology at Vanderbilt University.

Professor SI Park completed his D.D..S at Yonsei University, prior to obtaining his master’s degree in Medical Biochemistry from Korea University, and a Ph.D. from the University of Texas M. D. Anderson Cancer Center in U.S.A. He was also a Research Fellow at the University of Michigan their prostate cancer research team. After serving as Assistant Professor for Clinical Pharmacology in the Internal Medicine Department at Vanderbilt University, he has been teaching at Korea University since 2015. His current research is specialized in the interaction of tumors and the bone.