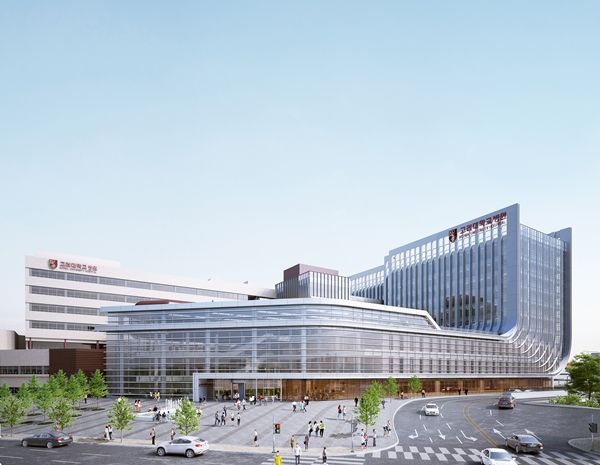 Korea University Medical Center started the construction of state-of-the-art Medical Applied R&D Global Initiative Center in earnest with the ground breaking ceremony of the center on Sep. 26. The new hospital, which will serve as a new driving engine for Korea University Medical Center is expected to be the hub to maximize the clinical and research capabilities of the hospital and bring about new paradigm in the medical sector under the motto of ‘Realization of the 4th industrial revolution in the medical sector’. The goal of the convergence medicine center is to realize future-oriented hospital that provides optimized and customized care to patients with serious diseases and establish the industrialization of medicine and virtuous cycle investment structure through research to emerge as a world-class medical center.

The state-of-the-art Medical Applied R&D Global Initiative Center is planned to be completed in 2022 with the scale of 130,000㎡ in total area. The facilities for care will be completed first to make a center specialized cancer, heart and nerve diseases. We plan to focus on improving the quality of care. In addition, treatment and research capabilities of three hospitals under Korea University Medical Center will be integrated into the convergence R&D center to establish the best infrastructure in Korea that can lead the medical research.

If the construction is completed, medical service based on precision medicine will be realized for the first time in Korea and the possibility of treating incurable diseases and serious cancers will be increased a step higher. In addition, the center will have A.I-Driven Hospital where A.I. is fully used and developed to make the best medical system that can provide accurate diagnosis and optimal treatment for patients. It will position itself as the model of a future hospital and mecca of the 4th industry, which collects medical information of patients and other data including genetic information and applies the information to patient care. 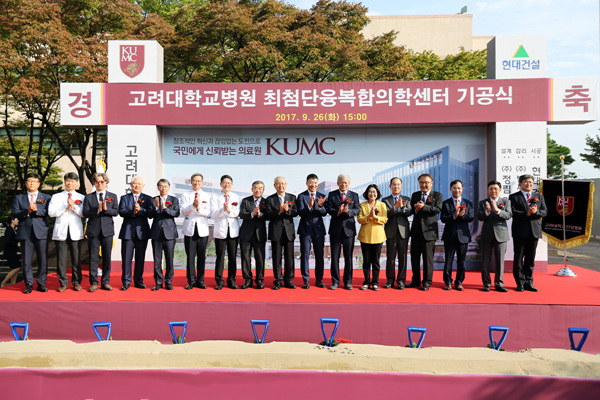 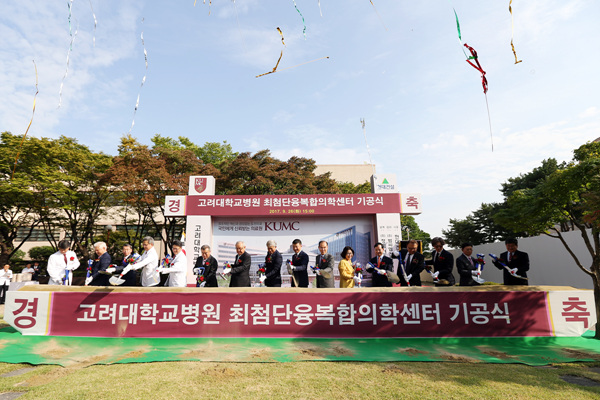 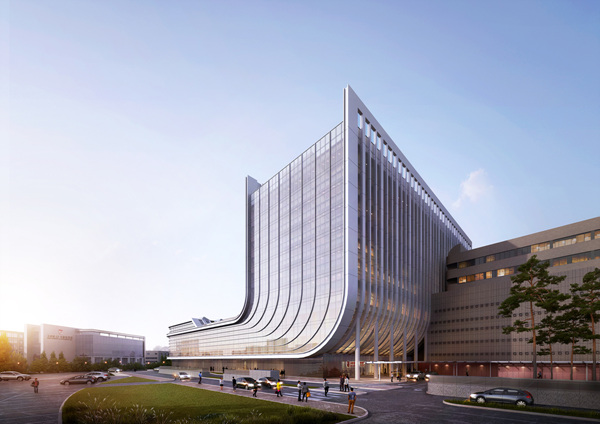 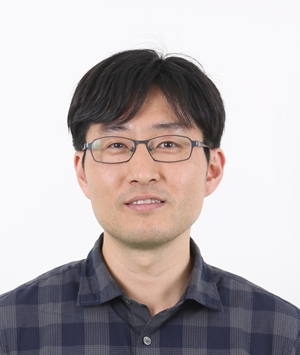 A team led by professor Dongmin Lee at Department of Anatomy developed a new optigenetics technology that identifies the relationship between neurons and specific behavior using light.

The process of thinking in our brain and linkage between the thought and behavior has not been revealed. Despite recent advances in optogenetics to manipulate cells in tissues with light, it has been difficult to develop the technology that controls the neuron that induces a certain behavior in a selective manner.

The “genetically encoded calcium indicator” technology, which was widely used in the present, measures the activation of cells by tracking changes in calcium concentration caused by neuronal activation. However, the technology had a limitation as the area for monitoring is limited and activated cells cannot be controlled secondarily.

Cal-Light (Calcium and Light-Induced Gene Handling Toolkit) developed by the team led by professor Dongmin Lee overcame the shortcomings of the existing technology to develop a technology to drive expression of gene in an activated neuron by recognizing both blue light and calcium concentration. If a photoreactive opsin is used as a reporter, we can manipulate activated neurons selectively.

By taking the idea from these characteristics, the research team made the lab mice learn into which Cal-Light was injected to receive compensation for lever-pressing behavior and injected lube right when the mice pressed the lever for the purpose of expressing a protein called halorhodopsin in the motor neuron. Halorhodopsion, which responds to yellow right, suppresses neuron and is expressed only by lever pressing behavior by Cal-Light system. The result showed that the lever pressing behavior was inhibited selectively when the yellow light was brought onto the lab mice. On the contrary, if the yellow was not brought after one day, the lab mice started pressing the lever.

As the test result shows, it becomes possible to manipulate a specific behavior by expressing optogenetic protein in neuronal ensembles utilizing Cal-Light. It is possible to control and observe the activities of neurons in tissues and even in freely moving animals and analyze the effect of neuron activity control.

The result of the study was recognized in its excellence to the extent that it is published in the international journal Nature Biotechnology of Nature under the title of in last Sept.

Professor Dongmin Lee said “Cal-Light presented a new way to study the direct relationship between cells and behavior, which has face difficulties in the previous research”. “The ultimate goal is to develop technology for the treatment of neuropsychiatric diseases such as dementia, disorder related to memory, epilepsy, depression and obsessive compulsive disorder”, he added. While inflammation is key pathogenic process of atherosclerosis leading to life-threatening complications such as acute myocardial infarction and sudden death, however, there is lack of high-resolution approach that can image inflammation in beating coronary arteries.

This highly translatable strategy may allow early detection of high risk atherosclerotic plaques before clinical manifestation and, thus, is expected to offer new avenue for personalized medicine in future.

This work was published in <EUROPEAN HEART JOURNAL> last year under the title of ‘Intracoronary dual-modal optical coherence tomography-near-infrared fluorescence structural-molecular imaging with a clinical dose of indocyanine green for the assessment of high-risk plaques and stent-associated inflammation in a beating coronary artery’. Korea University College of Medicine started opening the venue for academic research and information exchanges starting from this year by creating ‘KU Medicine Special Lecture Series’ and inviting prestigious scholars from world’s renowned universities and research institutes as a speaker.

The first series was a special lecture given by Professor Jae Ung Jung, who is a world’s renowned medical scientist in tumor virology and currently serves as the professor, Chair of the Department of Molecular Microbiology & Immunology and director at the Institute of Emerging Pathogens at University of Southern California KECK School of Medicine on Apr. 21. The lecture was provided under the theme of ‘Immunopathogenesis induced by Severe Fever with Thrombocytopenia Syndrome Virus’ and professor Jung explained the current state and future direction of the research as one of the most prestigious researcher in the area. He also added that he conducts a research assuming unlimited possibilities of unexplored world by keeping in mind the phrase ‘To Infinity and Beyond’.

The second series was given by Director Robert A. Star of the National Institute if Health under the theme of ‘A few journeys to Acute Kidney Injury and Chronic Kidney Disease’ on May 22. Director Robert A. Star said that acute kidney injury and chronic kidney diseases are still representative diseases from which people suffer mostly even though many trials are made to find new treatments. He said that many drugs fail to pass clinical tests even though they pass animal trial. He said that the most effective treatment, in his thinking, is a better understanding pathophysiology and early discovery and introduced many examples of studies which are being underway.

For the third series, Secretary General John Clemens of the International Center for Diarrhoeal Disease Research, Bangladesh (ICCDDR, B), a world-class research institute for infectious diseases, was invited on May 26 to provide a lecture under the theme of ‘Population Level Effects of Vaccines with Special Emphasis on Vaccine Herd Protection’. Secretary General John Clemens, who was hired as the first foreign visiting professor last November by Korea University College of Medicine is a world’s renowned scholar in the field of infectious diseases and vaccination and delivered a high-quality lecture on the effectiveness and role of vaccine’s herd immunity defense and knowledge about the latest researches.

Korea University College of Medicine plans to hold a number of lectures to make students have a global mindset and share the latest medical knowledge and experience.