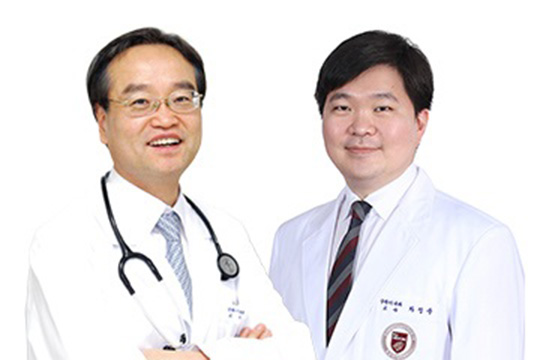 A new set of standard values for predicting the probability of complications in East Asian patients who have received antiplatelet therapy after undergoing drug-eluting stent implantation to treat their coronary artery disease has been suggested. A recently-concluded research has identified, based on reference values collected from East Asian patients, new standard values for predicting not just the probability of complications but also the mortality rate.

A research team led by Professor Do-Sun Lim and Professor Jung-Joon Cha of the Department of Cardiology, at Korean University Anam Hospital, and another research team led by Professor Seung-Jun Lee and Professor Byeong-Keuk Kim of the Department of Cardiology, Severance Cardiovascular Hospital have identified the difference between East Asians and westerners in their platelet reactivity unit (PRU) that result from the usage of antiplatelet therapy after drug-eluting stent implantation. This research was published in the latest edition of ‘JACC-Cardiovascular Interventions, IF 11.075’.

Patients who need to treat their chest pain that show signs of serious coronary artery stenosis often receive drug-eluting stent implantation. Stent implantation for coronary artery disease is always accompanied by antiplatelet therapy using aspirin or clopidogrel to prevent stent thrombosis and a series of other complications such as myocardial infarction, cerebral infarction, and all-cause death. However, some patients do not good respond to antiplatelet therapy and even develop complications. For this reason, physicians have often referred to PRU data, but unfortunately, this data so far have been based only on westerners.

East Asians including Koreans are known to have platelets that are physiologically built to experience fewer complications than westerners experiencing the same set of disorders. However, because of the lack of research based on East Asians and the lack of a clear set of reference values recommended for them, it was difficult to establish effective treatment strategies for East Asian patients.

The research team investigated to study the platelet reactivity and clinical outcome after antiplatelet therapy among East Asian patients. They identified 13,160 patients who had received drug-eluting stent implantation for coronary artery disease in 32 hospitals around the country and administered antiplatelet therapy on them before measuring their PRU and following them up for five years.

In conclusion, the research team concluded that patients with higher PRU had higher mortality rates and unsatisfactory prognoses. Western patients’ average  PRU value was 188, whereas East Asian patients showed a higher average of 218. The research team also found out that East Asian patients whose PRU value was 252 and over had a higher probability of critical complications such as myocardial infarction, cerebral infarction, and all-cause death.

Furthermore, existing studies carried out in the West regarding PRU had failed to explain any association between PRU and mortality. However, the present study has found that higher PRU tends to lead to not just a higher occurrence of ischemic complications such as myocardial infarction and cerebral infarction but also to even higher mortality. This study has followed up on the largest number of patients in the world for a long period of time and successfully identified the association between PRU and mortality rate; it has also paved the way for the establishment of a more reliable antiplatelet strategy after coronary stent implantation that is more appropriate for East Asians.

Professor Do-Sun Lim said, “East Asians, compared to westerners, tend to show different characteristics of PRU and thus require differentiated treatment strategy. This study has identified the impact of PRU on the prognosis of Korean patients who have undergone stent implantation. We wish this result can lead to far more effective treatment therapy for patients who need long-term antiplatelet therapy.” 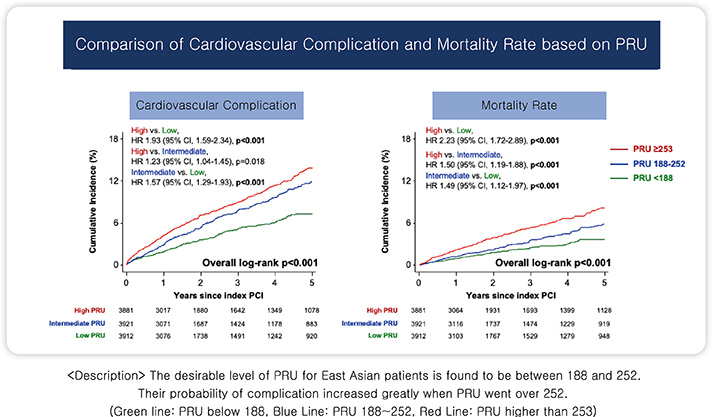 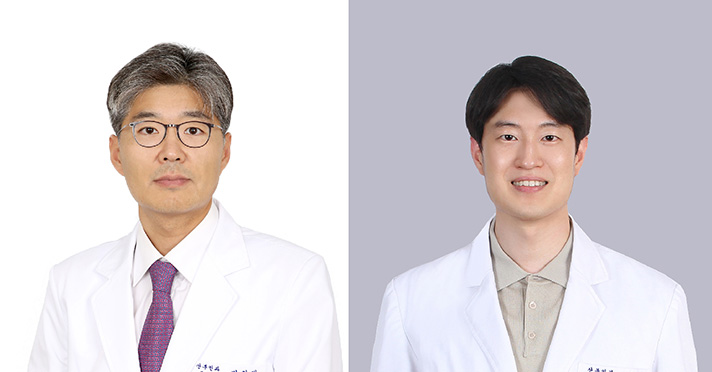 Professor Hyuntae Park and Professor Ki-Jin Ryu and their research team at Korea University Anam Hospital have identified the association between tamoxifen treatment in premenopausal women with breast cancer and their increased risk of uterine diseases including endometrial cancer.

Tamoxifen is one of the most widely used drugs to treat and prevent the recurrence of breast cancer. It is often used for a long period of time ranging usually between five and ten years. Postmenopausal women who use tamoxifen have been known to have a higher risk of endometrial cancer and are required to go through regular checkups.

However, for premenopausal breast cancer patients who also frequently use tamoxifen as a first-line therapy, there has been a lack of research on whether tamoxifen also increases their risk of endometrial cancer.

This is the first research to have identified the association of tamoxifen use with increased risk of endometrial cancer in premenopausal breast cancer patients based on a nationwide, population-based study. The study is especially meaningful in that it has proposed a critical set of data on how much the use of tamoxifen increases the risk of uterine diseases among Korean women who tend to develop breast cancer at an earlier age than western women.

The research team has said, “Currently, related treatment guidelines do not offer any warning or recommend a selective examination in relation to higher risks of uterine diseases among the premenopausal women with breast cancer. We hope our research can pave the way for improved treatment process and guidelines for prevention and management of uterine diseases for Korean women who are treated with tamoxifen.”

This research paper titled, ‘Risk of Endometrial Polyps, Hyperplasia, Carcinoma, and Uterine Cancer After Tamoxifen Treatment in Premenopausal Women With Breast Cancer’ was published in ‘JAMA Network Open(IF: 13.35)’, a highly-recognized international journal in the field, and is receiving a lot of interest from medical communities worldwide.

Frequent reports of incidences of child abuse are certainly a source of great despair these days. Childhood traumatic experiences caused by physical or emotional neglect or abuse can often lead to an increased incidence of psychiatric disorders such as depression, panic disorder, and borderline personality disorder. Furthermore, the experience can also affect the treatment and prognosis of these disorders.

In fact, a significant number of patients with depressive disorders have been abused as a child. Such patients often have poor response to pharmacological treatment or psychotherapy, leading to a higher incidence of chronic illness and suicidal attempts. Therefore, there is a need to identify the association between childhood abuse and brain structural alteration that can impact the onset and progression of depression.

A research team made up of Professor Kyu-Man Han of the Department of Psychiatry, Korea University Anam Hospital, and 4th-year students, Soo Young Kim, Seong Joon An, Jong Hee Han of the Department of Medicine, Korea University College of Medicine have identified that childhood abuse does lead to alteration of brain structure based on brain MRI data of major depressive disorder patients and a childhood trauma questionnaire.

The research team studied 75 patients with major depressive disorders and 97 healthy controls aged between 19 and 64. For two years between 2019 and 2021, the team collected data related to their childhood abuse experience by using their brain MRI imaging data, clinical information, and childhood trauma questionnaire. Their childhood abuse experiences were classified into physical, emotional, and sexual abuse for further research into how major depressive disorder diagnosis and childhood abuse can affect the volume of gray matter in specific areas of the brain.

In the case of major depressive disorder patients, the volume of gray matter in their right anterior cingulate gyrus (an area that regulates emotion) was 3.3% smaller than that of healthy controls. Among those patients with major depressive disorders, those who had experienced childhood sexual abuse showed 10% less gray matter volume in their right middle occipital gyrus.

This suggests that decreasing gray matter volume in the right middle occipital gyrus could be used as a biomarker of brain damage caused by childhood abuse. This research can also lead to the identification of major depressive disorder patients whose brain structure could have been altered by childhood abuse and help them to predict their progression and response to treatment.

Professor Kyu-Man Han who led the research said, “Patients with depression who have gone through childhood abuse tend to suffer from severer symptoms and a higher level of progression into chronic illnesses because their brain could have been damaged neurologically by their abusive experience. These patients need to be given personalized psychosocial treatment based on neuroscience.”

This research paper titled, ‘Childhood abuse and cortical gray matter volume in patients with major depressive disorder’ was published in the online edition of ‘Psychiatry Research (Impact factor: 11.225)’, a highly-respected international journal in the field of psychiatry.

Proactive Treatment of Symptoms based on Prediction 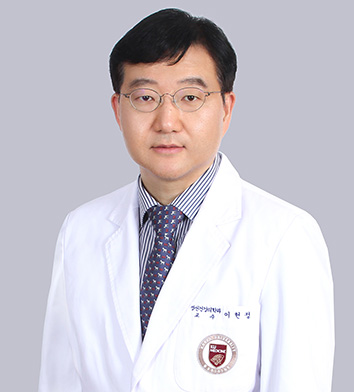 Recently, a research team has announced the development of a diagnostics tool that can help patients of recurring depressive disorders or bipolar disorders to predict impending recurrence using smart bands and smartphones. According to the research, by analyzing the circadian rhythm data of mood disorder patients collected through their smart bands and smartphones real-time using AI, it would be possible to predict the impending recurrence of their depressive episodes, manic episodes, or hypomanic episodes before they can recognize the symptoms.

A joint research team made up of Professors Heon-Jeong Lee and Chul-Hyun Cho of the Department of Psychiatry, Korea University College of Medicine, and Professor Taek Lee of the Department of Convergence Security Engineering, Sungshin University have released their research results that suggest that usage of smart bands and smartphones can lead to the prediction of recurrence of depressive episodes and bipolar episodes with more than 93% accuracy. The research is seen to have provided a breakthrough in mitigating the recurrence and symptoms of mood disorders and in improving the quality of life of patients by predicting the episodes through a simple way of collecting data.

The research team has worked with a total of 495 patients with major mood disorders (major depressive disorder, bipolar I disorder, bipolar II disorder) in 8 hospitals around the country and collected their data related to physical activity levels, sleep patterns, heart rates, and light exposure through their smart bands and smartphones real-time. The research team followed up and observed these patients for periods ranging from several months to 5 years for the recurrence of their depressive, manic or hypomanic episodes and any changes in their symptoms.

During the research period, a total of 270 episodes of depressive, manic, or hypomanic disorder occurred among those patients. The research team used AI to transform their digital phenotypes to 140 circadian rhythm-related variables and carried out machine training for predicting the recurrence of mood disorder episodes. As a result, the research team was able to predict the onset of any episode during the next 3 days (AUC: Area Under Curve) with a high accuracy of 0.937 for depressive disorders, 0.957 for manic disorders, and 0.963 for hypomanic disorders.

Professor Heon-Jeong Lee explained, “Depressive and bipolar disorders have a tendency of recurring without patients’ recognition. Our research results that can help patients predict their impending recurrence just by using their 24-hour circadian rhythm measured by their smart bands or smartphones would greatly benefit their treatment.“

Currently, Professor Heon-Jeong Lee is working with Hucircadian-the company that developed a smartphone application based on the prediction algorithm identified by this research- to complete the development of ‘CRM (Circadian Rhythm for Mood)’ which is a non-prescription based, digital therapeutic solution that helps patients to self-manage their symptoms of depressive and bipolar disorders. The solution is now being tested in clinical trials at 5 university hospitals to prove their preventive effects.